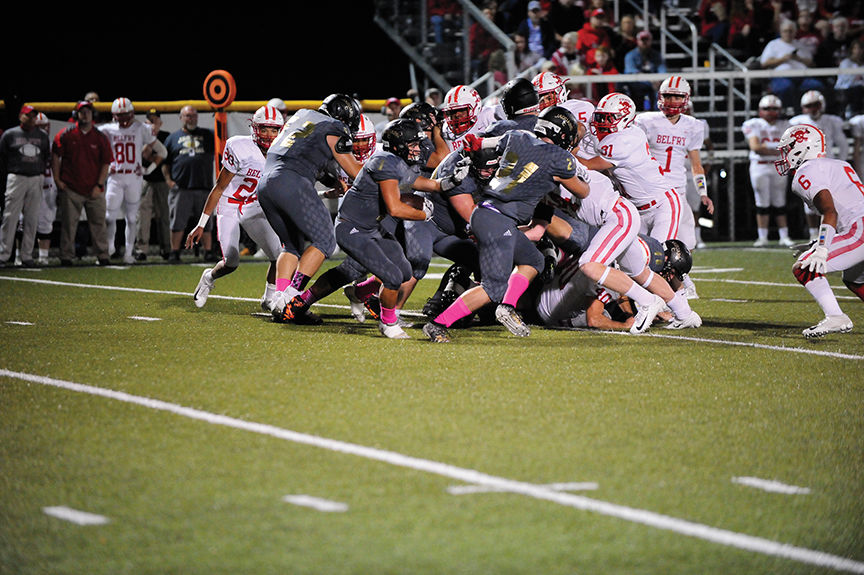 Floyd Central senior Brendan Evans looked for running room as the Jaguars hosted Belfry for a Class 3A District 8 game earlier in the month. 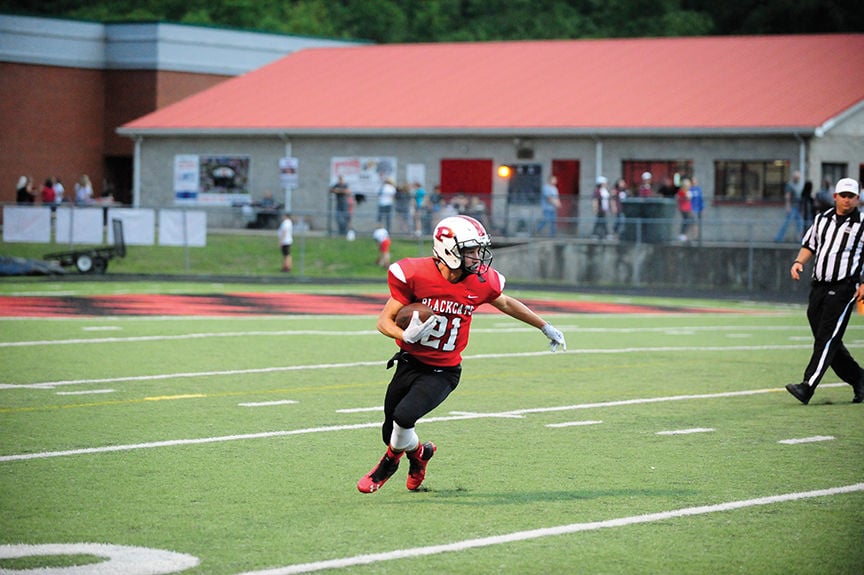 John Rose picked up yardage for Prestonsburg during a home game earlier in the season. The Blackcats will host Martin County at 7:30 p.m. Friday night. 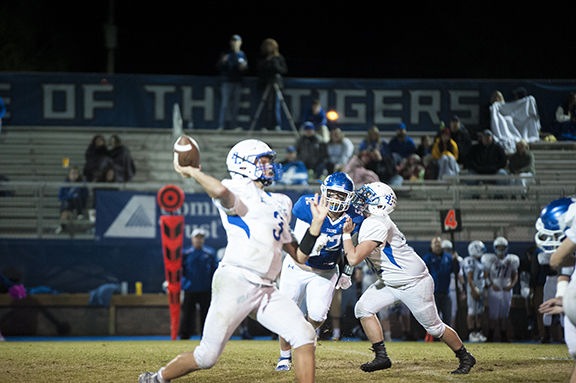 Betsy Layne quarterback Chase Mims throws a pass against Paintsville in action last week. The Bobcats fell to the Tigers 44-0.

Notes: Floyd Central is set to travel to Lawrence County for a key Class 3A District 8 football game.

The Jaguars and Bulldogs boast identical records. Each team is 3-5 overall and 1-2 in Class 3A, District 8.

Senior running back Dalton Boyd leads Floyd Central on the ground. Boyd has rushed 130 times for 638 yards and eight touchdowns.

Junior quarterback Brant Potter paces Floyd Central through the air. Potter has completed 19 of 35 passes for 284 yards and one touchdown.

Contributing on the ground for the Jaguars, Potter has rushed 54 times for 339 yards and three touchdowns.

Noah Marcum paces Floyd Central in receiving. Marcum has hauled in six receptions for 101 yards and one TD.

Brendan Evans, who is capable of taking carries out of the backfield, ranks second in receiving for the Jaguars.

Sophomore running back Blue Fletcher ranks second in rushing for the Bulldogs. Fletcher has rushed 65 times for 445 yards and one touchdown.

Kickoff for the Floyd Central-Lawrence County football game is set for 7:30 p.m. in Louisa.

The versatile Potter leads Floyd Central in passing and ranks as the Jaguars’ second-leading rusher.

One of the area’s most underrated high school football players, Gillispie is nearing 1,000 rushing yards.

Notes: Following three straight losses, Prestonsburg will look to conclude the regular-season with a win on the road. The Blackcats are slated to visit Martin County for a Class 2A District 8 football game that will serve as their regular-season finale on Friday night.

Through nine games, opponents have outscored the Blackcats 309-147.

Carter Akers leads the Blackcats in rushing. Akers has rushed 71 times for 346 yards and two touchdowns.

Owen Greene leads Prestonsburg in receiving. Greene has hauled in a team-best 14 receptions for 199 yards.

One of the Prestonsburg’s most versatile performers, John Rose helps to lead the Blackcats offensively.

Nathan McGuire paces Prestonsburg on the defensive side. McGuire has posted a team-high 57 tackles.

Martin County is on a losing streak of its own. The Cardinals have suffered back-to-back losses.

On the ground for Martin County, running backs Kolby Sparks and Logan Proctor have each rushed for over 500 yards. Quarterback Drake Muncy helps to pace the Cardinals’ offensive attack through the air.

Prestonsburg and Martin County, formerly known as Sheldon Clark, did not meet during the 2018 high school football season.

Kickoff for the Prestonsburg-Martin County football game is set for 7:30 p.m.

After hauling in one reception for 54 yards in a loss to Bath County, Greene leads the Blackcats in receiving.

Bears 2020 vision: D-line investments may be due, but it's about as stable as any unit

A productive running back, Sparks leads the Cardinals in rushing.

Notes: Betsy Layne will have an opportunity to return to the win column as Fairview visits for a Class A District 6 football game on Friday night.

Currently, Betsy Layne is on a five-game losing skid.

The Bobcats are 2-6 overall and 0-2 in Class A District 6. Betsy Layne has notched wins over Morgan County and East Ridge. The Bobcats have dropped games to Martin County, Magoffin County, Knott Central, Phelps, Raceland and Paintsville.

The Eagles are 2-5 overall and 0-2 in the district. Fairview has notched wins over Morgan County and Green, an opponent out of nearby Ohio. The Eagles have dropped games to East Carter, Nicholas County, Symmes Valley (Ohio), Paintsville and Raceland.

Quarterback Jack Roy leads the Eagles. Roy paces Fairview through the air and on the ground.

Betsy Layne and Fairview did not meet during the 2018 high school football season.

Kickoff for the Betsy Layne-Fairview football game is set for 7:30 p.m.

One of the state’s top young quarterbacks, Mims has passed for over 1,000 yards in eight games.

An underrated passer, Roy leads Fairview in passing and rushing.