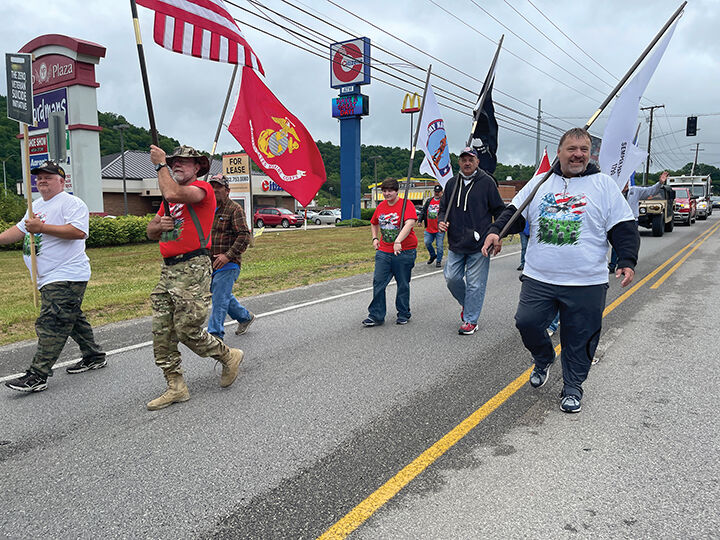 The Big Sandy DAV Chapter 18 of Auxier does the opposite of what many do on Memorial Day weekend and the day itself, staying quite busy with a more than a mile-long march through Paintsville seeking to raise awareness of the prevalence of veteran suicide and mental health issues and then traveling to Gethsemane Gardens in Floyd County to replace the flags on the graves of veterans. 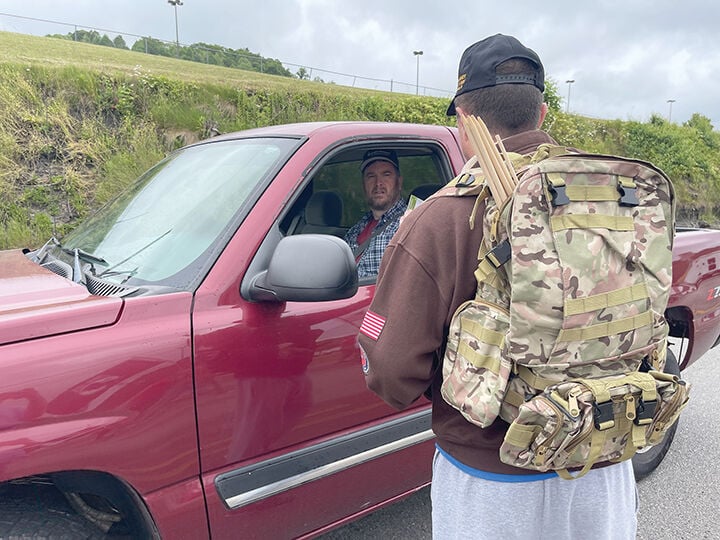 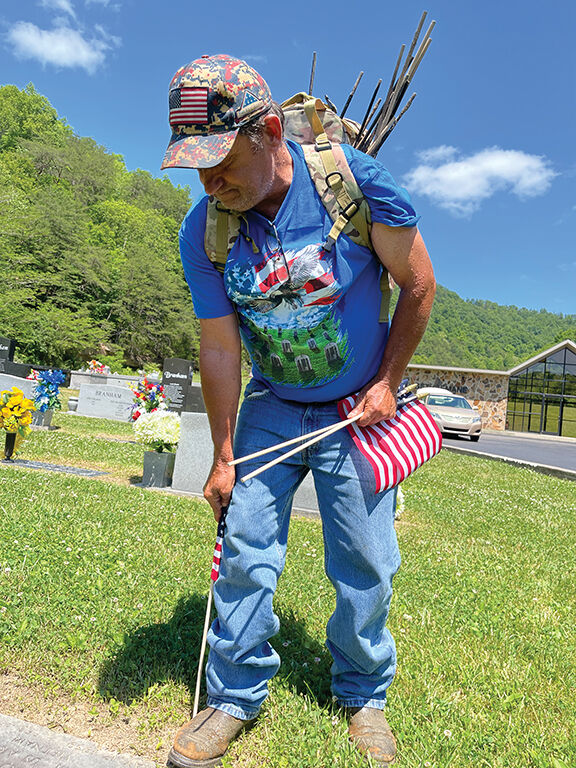 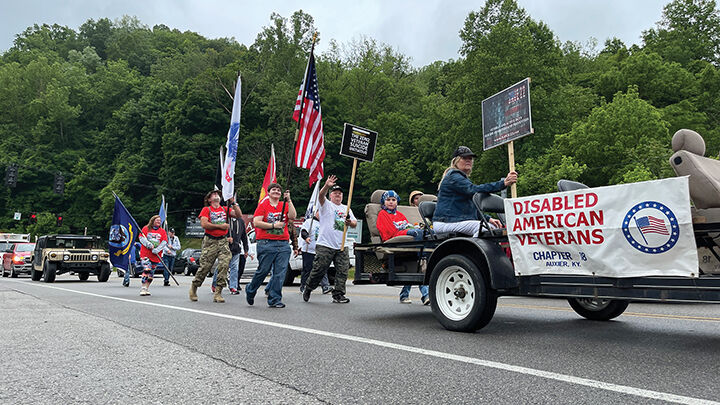 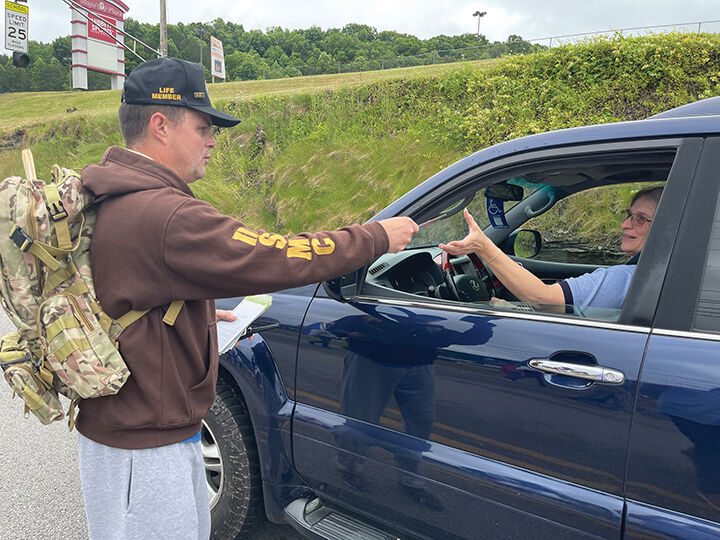 PAINTSVILLE — The Big Sandy Disabled American Veterans Chapter 18 of Auxier stays fairly busy during Memorial Day weekend, when most others are focused on relaxing.

This year, they spent their time marching in the rain on May 29 and handing out pamphlets to try and inform Johnson County residents about common mental health issues and the prevalence of suicide among veterans. Then, on Monday, May 31, they traveled to Gethsemane Gardens cemetery in Floyd County to replace the flags on the grave sites of numerous veterans, as they do each year.

When explaining why they do these things, DAV Chapter 18 Commander Danny Shepherd said he felt as though being a member of organizations like the DAV and the the Veterans Coalition for Quality Healthcare, of which he is the President, was the "second calling" for people like him, who have always been of the mind to serve others.

Shepherd said that the camaraderie of being a part of these organizations was also a useful outlet for veterans suffering from often stigmatized mental health issues, because it allows them to be around people who can identify with their struggles.

"Veterans suffer from PTSD, depression and anxiety fairly commonly. A lot of times a veteran can join these organizations, like the DAV, the American Legion or the VFW, or anything like that and there's veterans there who are suffering from the same things you're suffering from, it can give you somebody to talk to, to open up to, to give you an outlet," Shepherd said. "You're more free to open up to another veteran that what you would be to someone who doesn't know what you've been through, plus the stuff we do in the community, it makes them feel good, and I really think these organizations are another piece in the puzzle to help with mental health."

Beyond that, Shepherd said, suicide rates across the country and disproportionately prevalent among veterans, with there being approximately 20,000,000 veterans in the U.S. (approximately one out of every 16 members of the total population), yet accounting for 8,000 of the 44,000 total suicides, accounting for one of every 5 and a half members of the total population.

This is how justices questioned the GOP Obamacare challenge

Shepherd said the march was aimed at helping families recognize the signs of mental health issues among veterans and utilize their family ties to help them get into the Veterans Affairs system, which Shepherd said offers many options for mental healthcare and might be able to treat these illnesses and intervene before it reaches the point of a veteran ending their own life.

"That's the reason why we're trying to get the families to research more and look into it, because they're the ones who could help them more, if they could learn the signs and know what to look for and they know how to talk to their son, their brother, their daughter, their family, or whatever their relation might be, and tell them, 'Hey, there's help out there,'" Shepherd said. "The VA puts a lot of money into mental health, let's try to get you into the VA system, because there's a lot of veterans that aren't even in the system."

Shepherd said there were several common misconceptions about what could qualify a veteran for VA health benefits — especially that being qualified doesn't always mean you have to be 100-percent disabled and relying on those benefits to seek help.

"Just go in there and talk to them, start the conversation, there are certain requirements, for instance, between 1980-1990 you have to be at least 10-percent disabled, but I don't know all of the requirements," Shepherd said. "It's worth talking to them and finding out what is available to you."

Shepherd said that the DAV wants to continue to help veterans and offer them a life line, through their efforts in community outreach, fundraising and the donations they make to the Veterans Referral Center in Paintsville, but that the issues veterans face are multi-faceted and require effort from many different angles to put together a comprehensive approach.

According to the U.S. Department of Veterans Affairs, there are many signs that friends or family can watch for in veterans to help in times of mental health crisis, such as appearing sad or depressed most of the time, hopelessness or feeling like there’s no way out, anxiety, agitation, sleeplessness, or mood swings, feeling as if there is no reason to live, feeling excessive guilt, shame, or sense of failure, unexplained rage or anger, engaging in risky activities without thinking, losing interest in hobbies, work, or school, increasing alcohol or drug misuse, neglecting personal welfare; a deteriorating physical appearance, withdrawing from family and friends, showing violent behavior, like punching a hole in the wall or getting into fights, giving away prized possessions and getting affairs in order, tying up loose ends, or writing a will.