Unless you’ve been offline for the last week, you’ve probably heard about the Federal Aviation Administration’s temporary shutdown of all air traffic.

As a West Coast-based flyer with plans for an in-state trip, I awoke last Wednesday morning to news of widespread flight cancellations and delays. My departure flight was going to leave an hour late, but my return flight later that afternoon would probably be fine, right? Wrong. Let’s talk about it.

What happened to the FAA?

An overnight outage to the FAA’s Notice to Air Mission, or NOTAM, system forced a ground stop of all aircraft until 8:15 a.m. Wednesday, Jan. 11. And while operations gradually resumed as the day progressed, waves of cancellations and flight delays rippled across the country.

Preliminary reports indicate that this was all because of a damaged database file, says the FAA, but what exactly did it look like for the many thousands of people stranded on the ground? I was one of them, so let me tell you.

The airport was in chaos

My schedule for the day was a relatively easy one, flying from San Diego to San Francisco and back to review the newly reopened American Express Centurion Lounge.

My original departing flight at 10:15 a.m. was delayed by an hour in the morning, and I received no word about my 3:15 p.m. return flight — until I was sitting on the tarmac for my outbound flight waiting to taxi. The problem? I needed to be back on time to celebrate my birthday at a dinner with my family.

When I finally got to San Francisco, the airport was a mess, with people rushing to and fro as gates changed, crews timed out and flights were pushed back.

How elite status saved the day

Since my original itinerary was now going to make me miss dinner due to delays caused by the FAA outage, I spent my entire 90-minute flight north trying to find a workaround using the in-flight Wi-Fi. A quick scan of Google Flights showed that there was a United Airlines flight that would get me home on time.

The only issue? It was already past the flight's original departure time of 1:07 p.m., so it was impossible to purchase a ticket. But like so many other flights across the country, this one had been delayed an hour (to 2:20 p.m.), so I knew it hadn't taken off yet.

A United messaging agent was unable to help me, so I bought a ticket for an even later flight that night and attempted to change it myself to the 2:20 p.m. flight. No dice. Instead, when I landed in San Francisco, I immediately called the Premier 1K line and sprinted for the United gate of that not-yet-departed flight.

You see, top-tier United elite members have exclusive access to their own phone line. Instead of waiting on hold or trying to find an in-airport customer service representative, Premier 1K members are routed instantly to an agent who can help.

So although the other avenues I had pursued to change the flight — like United’s messaging representative — wouldn’t let me change my later flight to the 2:20 p.m. option, the Premier 1K phone agent could.

U.S. States With the Worst Roads

6 Ways to Move Back Out of Your Parents’ House

Targeted Drug Tagrisso Could Be Advance Against Lung Cancer

I ended up spending six hours at the airport in San Francisco because that 2:20 p.m. flight kept getting pushed back. In the end, I was able to visit the AmEx Centurion Lounge because I was still waiting to board.

I made several calls to the 1K desk each time my flight got further delayed. United Premier members can make free changes to flights within 24 hours of departure, so I would ask to be transferred to a new flight without worrying about having to pay more. Unfortunately, those new flights were also delayed or canceled.

It was only after yet another flight had been canceled that I dialed the 1K line to make one last adjustment. Coincidentally, I was put back on the first United flight I booked for the 2:20 p.m. departure — despite the fact that it was already boarding. Generally, you're not allowed to book a flight that's already boarding, but the 1K phone agent was able to make it happen, and it wouldn't have been possible without my elite status.

I missed my dinner and arrived five hours late, but at least I made it home that night.

What to do if your flights are canceled or delayed

You may not have top-tier elite status, but there are still ways to smooth your path if your flight plans are disrupted.

Here's what you can expect from different carriers for a "controllable cancellation," per the DOT. 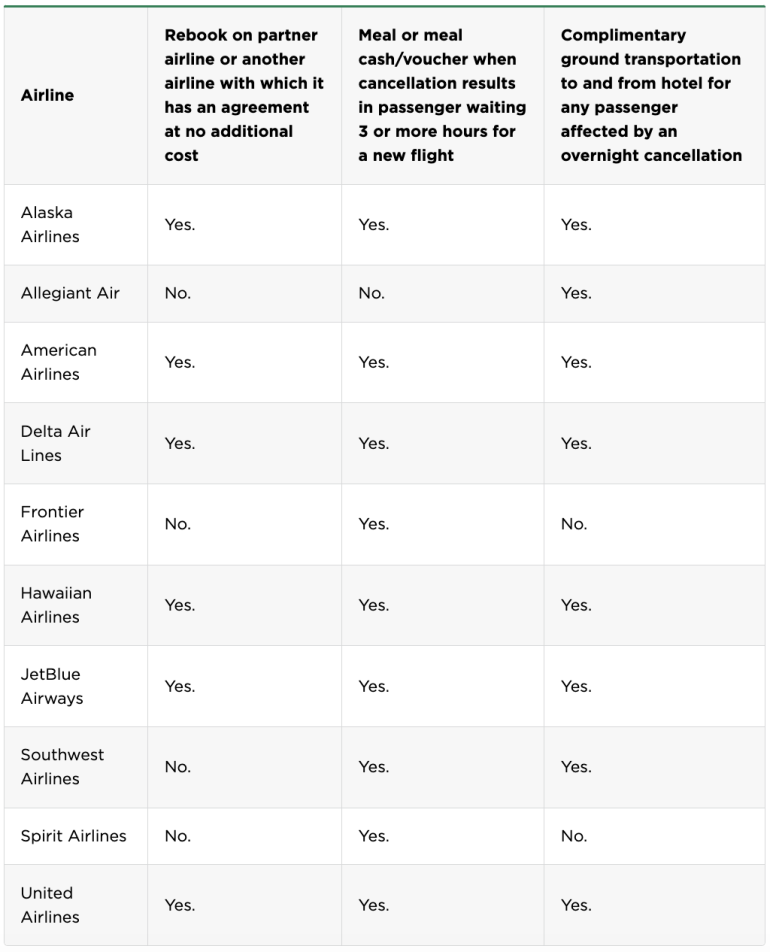 It’s never pleasant when your travel plans are interrupted. But if you have airline elite status, you’ll be first in line for accommodations. At the least, you’ll get to skip the queue when it comes to contacting an agent.

Otherwise, head for your airline’s customer service center while you wait on hold — and keep the DOT’s dashboard on hand.

The article I Flew During the FAA Fiasco — and Elite Status Got Me Home originally appeared on NerdWallet.