Gov. Matt Bevin signs an executive order, directing state agencies to reopen the prison at Wheelwright as a state-operated facility. 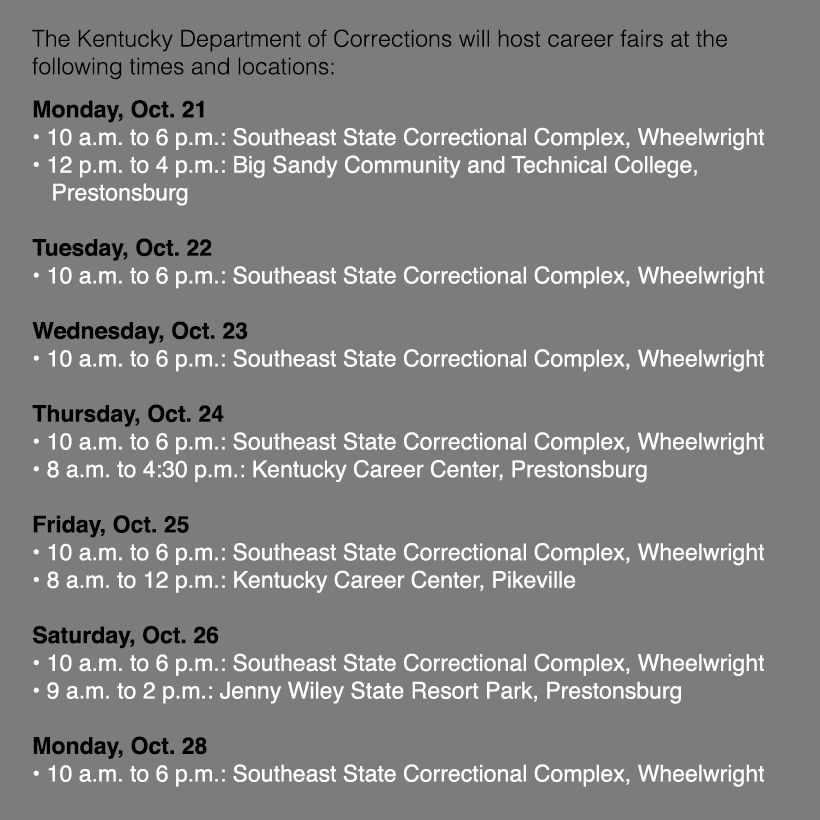 State officials traveled to Wheelwright on Friday to announce that the former Ottercreek Correctional Facility, will reopen its doors.

Gov. Matt Bevin and officials with the Justice and Public Safety Cabinet joined local officials at the announcement, held at the Wheelwright Fire Department. Bevin signed an executive order reorganizing the Justice and Public Safety Cabinet to reopen the prison, directing the cabinet to work with the Finance and Administration Cabinet and the state budget director to reopen the prison.

Bevin said it will "make a powerful impact" on the economy.

"It's a chance for us to celebrate an opportunity to bring things into a community that are needed and that, frankly, this isn't patronage, this isn't feeling sorry for people, this isn’t, ‘Gee, I wish we could, like, give you a hand out,’” he said. "This is you providing for us at this state something that we desperately need that this community has to offer."

Thomas Stephens, the personnel cabinet secretary, said the prison will create 193 full-time state jobs with starting salaries of corrections officers at $30,000 annually, in addition to other positions available. The state is posting these jobs online, officials said, and will be hosting career fairs starting Monday, Oct. 21.

On Oct. 17, the Kentucky Department of Corrections reported that the state had 24,003 prisoners in custody in all facilities, including halfway houses and county jails. The total jail population was 11,285. The Floyd County Detention Center was reported as being 141 percent over capacity this week. The jail is equipped to accommodate 112 inmates and housed 158, the DOC reports.

DOC Commissioner Kathleen Kenney said the prison will not house state inmates who are statutorily required to be housed in county jails.

"We know this is just the first step in reducing the backlog and we are continuing to explore other housing alternatives," she said. "The Southeast State Correctional Complex, which will be name of the facility, will be a state prison in every way other than the ownership."

She said the prison will provide a substance abuse and vocational programs, a statement that prompted applause from the audience. She toured the facility prior to the announcement in Wheelwright, reporting that it already has an area designated for carpentry.

"This is for real. This is happening," he said, mentioning the career fairs.

He and other officials who attended the event said the reopening will impact the region.

"It is a great day for Wheelwright, Floyd County and Eastern Kentucky," Turner said, thanking Bevin for signing the executive order. He said he would work with the Republicans during the General Assembly to ensure the prison opens.

"This is absolutely a fantastic day because it is very badly needed here in Eastern Kentucky," he said.

Laferty said the prison once employed between 165 and 195 people in Wheelwright. She thanked a long list of officials responsible for the announcement, including local officials and CoreCivic employees who have worked with her and other officials to prepare the prison for reopening.

"I hope that we're able to bring more of those quality, state-grade jobs to our community," she said, thanking officials who made the announcement possible. She said she toured the facility in June and again last week, thanking CoreCivic employees for "maintaining the property so as to make it walk-in ready and make this possible."

Kenney said the state will start moving DOC inmates into the facility sometime in early 2020 and that will create space at other facilities.

"I can tell you the activation of this facility is DOC's top priority," she said.

The prison can accommodate 650 prisoners, but officials don't know how many will be housed there at this time. Kinney reported that state officials are currently negotiating a lease for the facility from CoreCivic, the company that owns the prison and used to house prisoners there.

Gov: NJ could lay off teachers, police, fire without help

Amanda Gilchrist, director of public affairs for CoreCivic, reported that Bevin reached out to the company.

"As Gov. Bevin has stated, the Commonwealth of Kentucky has identified a need and reached out to the company about the Southeast Kentucky Correctional Center, located in Wheelwright," she said in a statement. "We will be working with the administration in the coming weeks but do not have an announcement to make at this time. As a company, this partnership is just one example of the flexibility we have and the solutions available to meet the needs of our government partners, including real-estate only opportunities."

Kenney said the cost of reopening the prison will be determined at a later date, after the lease agreement is finalized. She said it costs about $15 million annually, excluding the lease, to operate a similar size facility.

She said officials do not yet know how the lease will impact the City of Wheelwright, which has been receiving funds from CoreCivic for the property for years.

Mayor Don Hall said CoreCivic provides Wheelwright about $10,000 monthly. When the prison was previously operational, the company spent about $30,000 a month on utilities and it also paid Wheelwright 50 cents per prisoner per day, Hall said.

He and others in the Wheelwright community are thrilled about the news. He talked about how officials have been working toward this goal for years.

When asked whether the state contract will include payments to Wheelwright like those did previously, Hall said, "We'll just have to go to the table. We're just so excited for this to happen. That's what I was telling some of them boys, I said, down the road, 170 jobs doesn't sound like a lot. But you come to this area, this real rural community, and you put 200 jobs in here — state jobs, state pay. Hey, there's people in this whole area, Pike County, Knott County, they'll give their job up they previously got if they can get a job there."

Wheelwright started its venture with the 650-bed prison more than two decades ago. Since then, there have been several deeds, deed corrections and other documents filed on the property in the Floyd County Clerk’s office, and the Wheelwright City Commission has renewed an agreement with the prison several times.

The prison in Wheelwright is subject to a deed of conveyance the city gave the company years ago. The deed includes provisions that allows the city to take ownership of the facility if it ceases to operate for more than two years, fails to maintain at least one employee there for 60 consecutive days or converts to a maximum security facility. The company pays Wheelwright about $120,000 annually.

Under its former name, the prison closed in 2012 after Gov. Steve Beshear submitted a budget that included the transfer of inmates to other prisons operated by the state. The effort came to save the state money, but it also came after allegations of sexual abuse and other issues at Ottercreek.

Kentucky started housing 400 female inmates at Otter Creek in 2005. The announcement of this decision came a few months after the Indiana Department of Corrections notified CCA that it would remove 620 male inmates from the prison.

After the change, the company stopped paying the city of Wheelwright 50 cents per day per inmate, as it had been doing previously. The state of Hawaii also sent female inmates to Otter Creek, and one of them, Sarah Ah Mau, died amid claims that she was denied medical treatment for several months.

The following year, Otter Creek employee Eldon Tackett of Melvin pleaded guilty to sexual abuse for trading oral sex with a female inmate for candy and food. He was the first of six Otter Creek employees to be charged with similar criminal offenses over the next few years.

In January 2008, Otter Creek employee Carla J. Meade smuggled a loaded gun into the prison and committed suicide in the warden’s office. The following year, Hawaii pulled its female inmates from the prison.

The Kentucky Department of Corrections released its investigative report into claims of sexual abuse at the prison in 2009 and it denied a request for the company to increase the rate the state pays to house prisoners there, citing alleged sexual abuse, inmate fights, improper reporting of an inmate death and other issues.

In 2010, the state’s cost to house prisoners at Otter Creek and two other prisons CCA topped $21 million. The state did not renew its contract with CCA to house inmates at the Lee Adjustment Center in Beattyville that year.

That year, Gov. Beshear ordered the removal of the state’s female inmates from Otter Creek. The state transferred male inmates into the prison instead.

The following year, legislators began a process of modifying the state’s penal code to reduce prison time for non-violent offenders and reduce costs associated with imprisoning inmates. After legislation passed, the Kentucky Jailers Association requested that the state let its contracts with CCA expire because the new legislation would financial harm county jails. At the time, county jails were paid $31.34 per day to house inmates, but the state paid higher rates to CCA. It paid CCA $37.99 daily to house minimum security inmates and $47.98 to house medium security inmates at Marion Adjustment Center and $53.77 to house inmates at Otter Creek.

CCA reported that it housed 625 inmates at Otter Creek on Feb. 1, 2012, and the closure was finalized that summer. The facility had operating losses $1 million the previous year, CCA reported in documents filed with the Securities Exchange Commission.

In 2016, Bevin vetoed language in the state budget that would have allowed the reopening of Otter Creek and other private prisons, reporting that the state's options should not be limited and noting that he had authority to contract with private prisons if necessary.

The budget language would have allowed the state to recommission private contracts in Floyd,  Marion and Lee counties if county jails become overpopulated. The Kentucky Jailers Association, the Kentucky Judge Executive Association and other organizations opposed the budget language, saying the private prison policy would shift money away from counties. They reported that the state pays $35 per inmate daily to house prisoners in county jails, but said it would cost $55 daily to house them in private prisons.

In 2017, the state awarded a contract to reopen the Lee County prison, which remains open today.