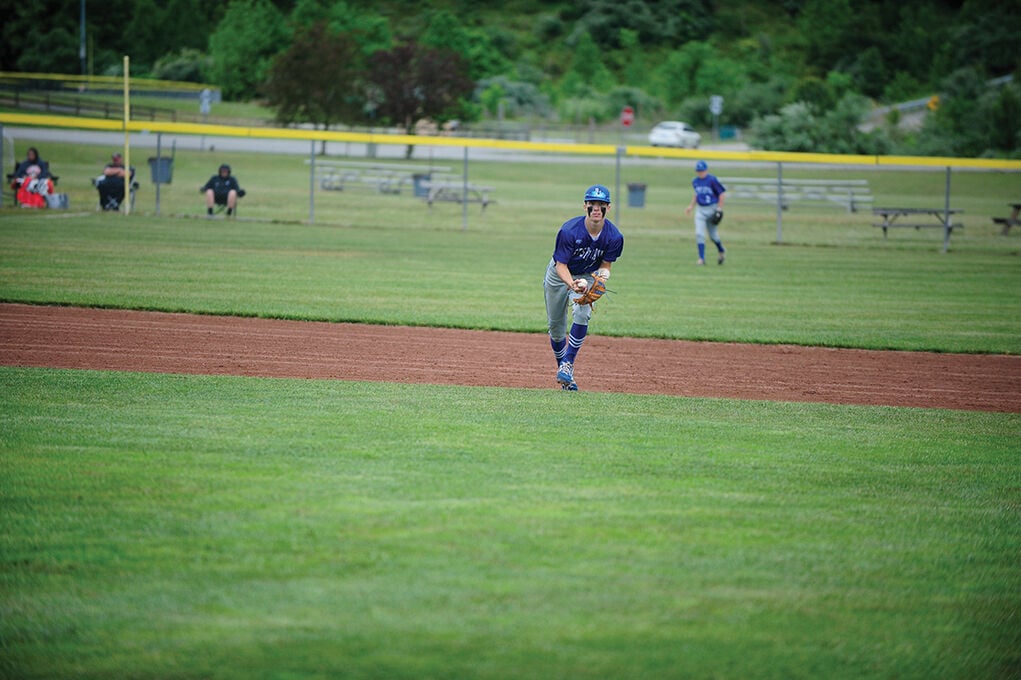 Betsy Layne shortstop Brady Robinson fields a ground ball during the semifinals of the 58th District Baseball Tournament on Saturday, May 29. 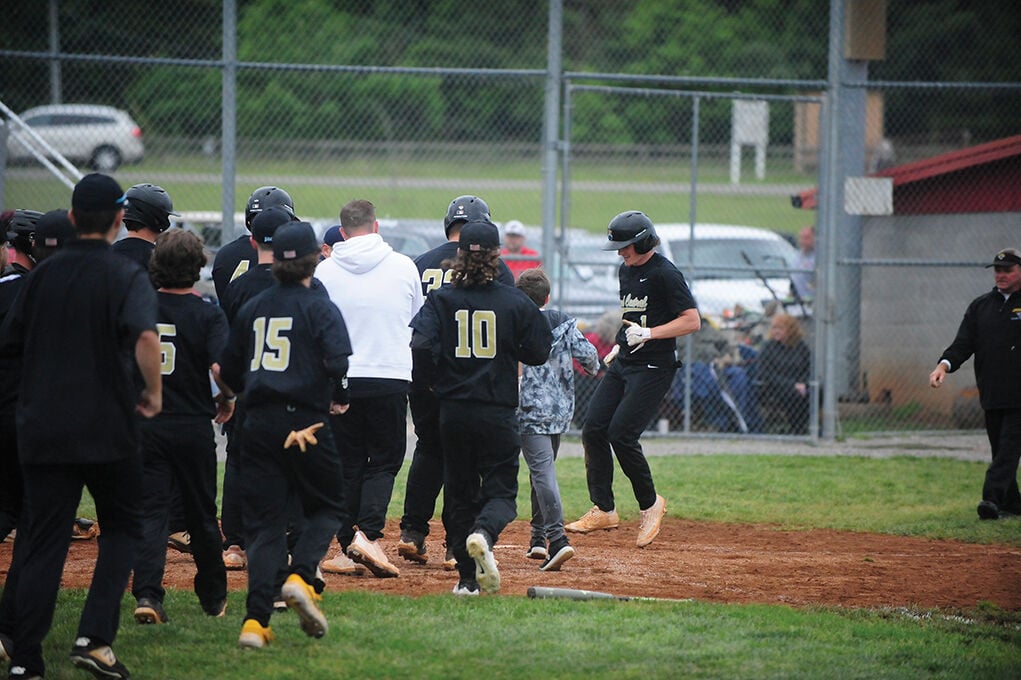 Floyd Central's Caleb Hager approached home plate after hitting a home run in the semifinals of the 58th District Baseball Tournament on Saturday, May 29.

The Jaguars were forced to play from behind throughout the district tournament title game.

Moving ahead early, Lawrence County scored six runs in the bottom half of the first inning.

Lawrence County outhit Floyd Central 11-2 and committed only one error.

Bryce Blevins, a junior who is committed to the University of Kentucky, earned the win on the mound for the Bulldogs. Lawrence County's ace, Blevins surrendered zero runs on two hits over five innings, recording 11 strikeouts. Blevins threw 65 pitches.

Caleb Hager took the loss on the mound for the Jaguars. Hager, who homered for Floyd Central in the semifinals of the district baseball tournament two days earlier, pitched one inning, allowing six runs on four hits.

Dylan Mosley pitched in relief for Floyd Central, allowing four runs on seven hits while giving up one walk and registering one strikeout.

Brant Potter and Nick Rackey recorded one hit apiece for the Jaguars in the shutout loss.

Both Lawrence County and Floyd Central advance to the 15th Region Baseball Tournament.

Determined Floyd Central pushed across two runs during the top half of the first inning and eventually knocked off host Prestonsburg 7-3 in the semifinals of the 58th District Baseball Tournament on Saturday, May 29.

Floyd Central pulled off the emotional win after Prestonsburg swept a 58th District baseball regular season series between the two teams, winning convincingly in a pair of games played April 26-27. Prestonsburg outscored Floyd Central 27-4 during the two-game regular season series but the Jaguars rose to the occasion in the district tournament semifinals.

The loss eliminated Prestonsburg from the high school baseball postseason.

The Jaguars overcame three errors to notch the win.

Facing a two-run deficit, Prestonsburg crossed home plate three times in the bottom half of the fourth inning.

But the Jaguars answered.

Moving back ahead, Floyd Central scored two runs in the top half of the fifth inning to take a 4-3 lead.

Still, the Jaguars wouldn’t be denied a win.

Finishing strong, Floyd Central added three runs in the top half of the seventh inning.

Jacob Bentley earned the win on the mound for the Jaguars. Bentley surrendered three runs on three hits over five innings while registering five strikeouts.

Working out of a relief role, Caleb Hager pitched the final two innings for Floyd Central. Hager recorded the last six outs to notch the save.

Payton Burke took the loss on the mound for the Blackcats. Burke pitched a complete game, allowing seven runs on 12 hits while recording seven strikeouts.

Providing a lift at the plate for the Jaguars, Hager belted a two-run home run in the fifth inning.

Hager, Prater and Potter each drove in two runs for the Jaguars.

PRESTONSBURG -—Lawrence County limited Betsy Layne in the semifinals of the 58th District Baseball Tournament, pulling away to beat the Bobcats 11-0 in five innings at Prestonsburg Sports Park on Saturday, May 29.

Lawrence County moved ahead during its initial at-bat, plating one run in the bottom half of the first inning.

Following a scoreless second inning, while clinging to a 1-0 lead, Lawrence County erupted for 10 runs in the bottom half of the third frame.

Jake Derifield earned the win on the mound for Lawrence County, pitching a complete game shutout. Derifield allowed two hits and zero runs over five innings, striking out four and walking one.

Abner Collinsworth, Ethan Whitt and Jacob Fletcher each recorded multiple hits for the Bulldogs. Collinsworth went 3-for-4 at the plate to lead Lawrence County's offensive attack.

Aiding runners in advancing around the bases, Whitt drove in three runs for the Bulldogs.

Lawrence County made only one defensive miscue while the Bobcats committed six errors.

Matthew Dudleson and Keaton Brown collected one hit apiece for Betsy Layne in the season-ending loss.