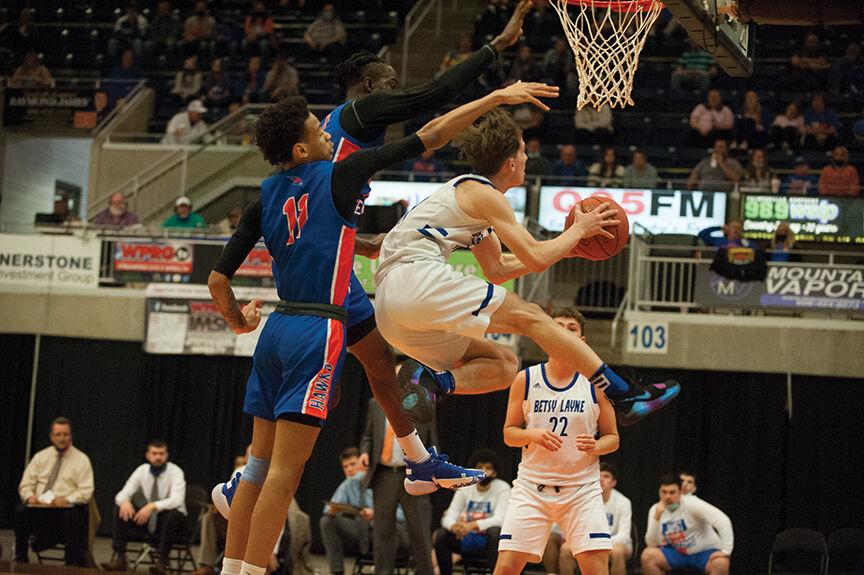 Betsy Layne’s Brady Robinson contorts his body as he goes up for a shot against Pike Central Monday night in the opening round of the 15th Region Tournament. The Bobcats picked up a 74-62 win over the Hawks to advance to the 15th Region semifinals Friday night at 6:30 p.m. against Johnson Central. Robinson scored 22 points and had six steals in the win. 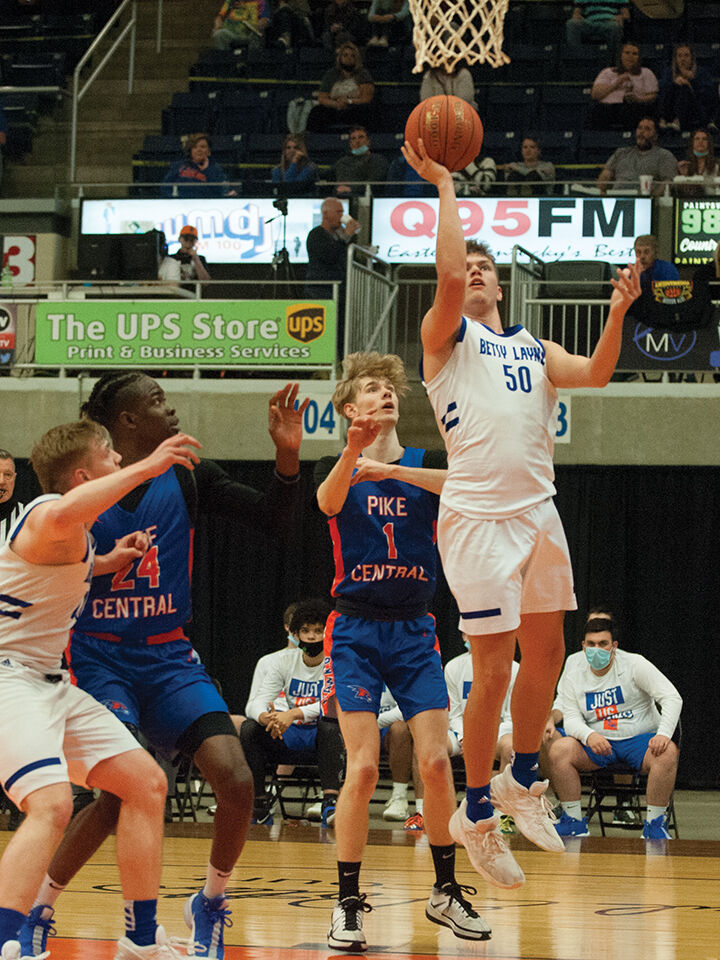 Betsy Layne’s Chase Mims goes up for a shot over Pike Central’s Josh Du Toit in the 15th Region Tournament Monday night at the Appalachian Wireless Arena. Mims scored a game-high 24 points and pulled down 10 rebounds in the Bobcats’ 74-62 win over the Hawks.

The second half was all Betsy Layne Monday night in the opening round of the 15th Region Tournament as the Bobcats picked up a 74-62 win over Pike Central.

With the win, Betsy Layne improves its record to 13-8. The Bobcats will take on Johnson Central Friday night at 6:30 p.m. at the Appalachian Wireless Arena in the 15th Region semifinals. Johnson Central picked up a 71-68 triple overtime win over East Ridge for the Golden Eagles’ spot in the semifinals.

In the third quarter, Pike Central’s Bryce Adkins scored to tie things up at 28-28. Kasope Lawrence scored and was fouled with 6:43 left in the third; he knocked down the free throw to push the lead to 31-28.

Betsy Layne answered as Jacob Rainey knocked down a pair of free throws with 6:32 left in the third. Nicholas Howell followed with a three to put the Bobcats up 33-31 with 6:03 left.

Pike Central answered with a 7-0 run.

Betsy Layne answered with six straight to push the lead to 45-38.

Latee Childers answered for the Hawks as he knocked down a three and Du Toit added a basket with just 10 seconds left to cut the lead to 45-43.

Robinson ended the third with a steal and a basket to give the Bobcats a 48-43 lead entering the fourth quarter.

Chase Mims opened the fourth with six of eight straight points for the Bobcats to push the lead to 56-43.

Mims had an outstanding game for Betsy Layne. He scored a game-high 24 points, pulled down 10 rebounds, blocked three shots, dished out two assists and came up with a steal. Robinson followed with 22 points and six steals for Betsy Layne. Kidd added 11 points and Howell finished with nine points and five assists.

Mims answered with two straight baskets and Robinson put the game on ice as he came up with a steal and a basket. He was intentionally fouled on the play with 3:09 left in the game. He made the free throw to push the lead to 63-49 and the Bobcats got another possession. Kidd scored on the extra possession as the lead ballooned to 65-49 with 2:28 left.