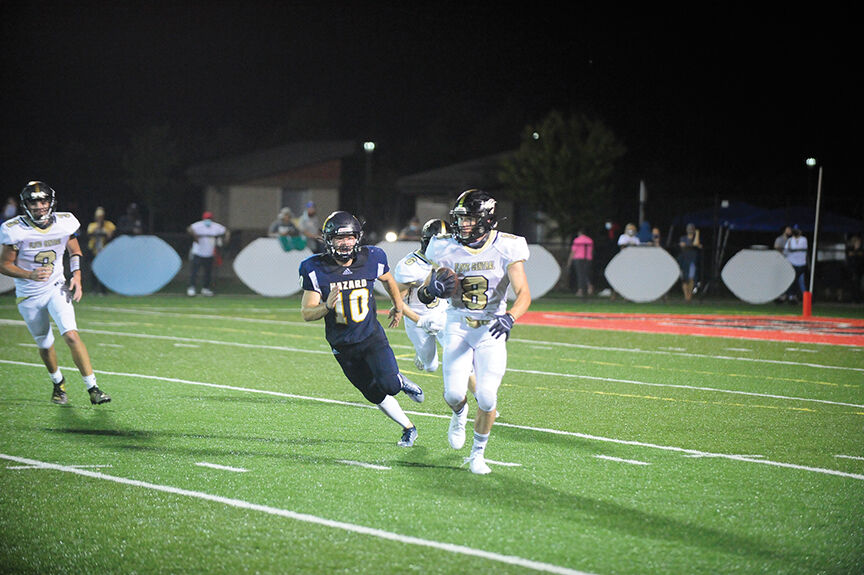 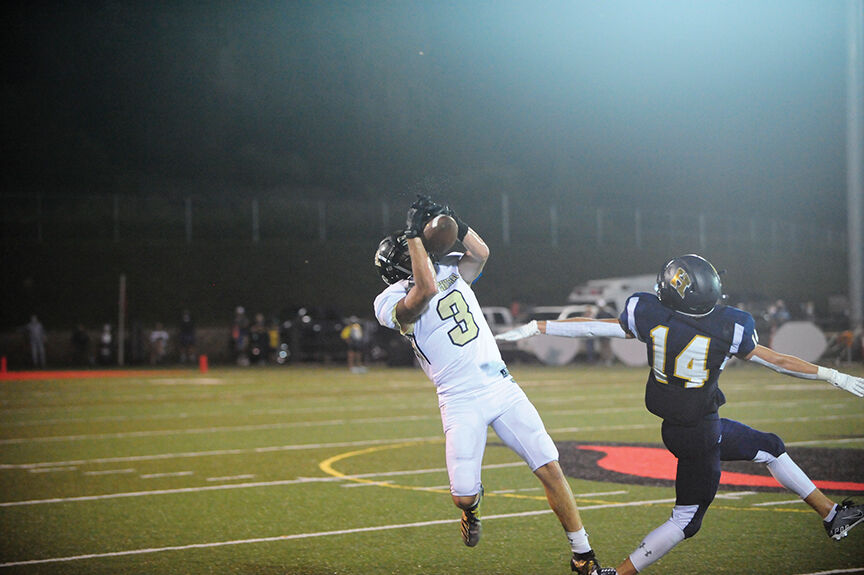 Floyd Central’s Sheston Johnson attempted to haul in a pass.

HAZARD — Determined Floyd Central outscored Hazard 18-0 in the second half to win 24-21 in the Bill Dixon Bowl at East Perry Elementary School on Saturday, Sept. 12.

A high school football team from the Beaver Creek portion of Floyd County notched a win over a Hazard prep gridiron squad for the first time since 2004. In 2004, South Floyd defeated Hazard 56-20.

The Jaguars limited Hazard, which led 21-6 at halftime, throughout the second half.

“This was a big win for our program,” said Floyd Central coach Shawn Hager. “We are out of shape, but I am very proud of our kids for not giving up. We looked better on offense and defense in the second half. I thought our kids were very nervous during the first half, but settled down in the second half once they got a little confidence.”

The Jaguars moved ahead of Hazard 24-21 with 7:02 remaining in regulation.

The senior quarterback had a hand in on each of the Jaguars’ four TDs. Hager completed three of 10 passes for 99 yards and one TD. He threw one interception in the season opener.

Brant Potter was on the receiving end of Hager’s scoring pass. Potter paced Floyd Central in receiving, reeling in two receptions for 91 yards and one TD.

Splitting time at quarterback for the Bulldogs, Nick Miller completed one of five pass attempts for 17 yards and threw two interceptions. More productive on the ground, Nick Miller rushed six times for 57 yards.

Tyson Turner and Andrew Ford hauled in one TD pass reception apiece for the Bulldogs.

Turner led Hazard on the ground, rushing six times for 101 yards and one TD.

The Bulldogs rushed 24 times for 271 yards and one TD in the loss.

STANTON — Prestonsburg owned multiple leads but lost its momentum in the second half as host Powell County overcame a slow start to win 34-28 in a high school football season opener on Friday, Sept. 11.

Husker games on the radio served as a lifeline for fans, learning experience for broadcasters

Moos on the radio: Big challenge to get logistics sorted out; Huskers, Iowa want to play Black Friday

The Blackcats experienced a letdown after leading 22-7 at halftime.

Stephen Norris paced Powell County on the ground, rushing 17 times for 131 yard and two TDs. In a similar offensive performance for the Pirates, Tyler Charles rushed 16 times for 111 yards and a pair of TDs.

In another strong offensive effort for the Blackcats, Nathan McGuire rushed four times for 99 yards and one TD.

Through the air, Slone completed three of five passe for 33 yards while throwing one interception.

Adam Blair hauled in a team-high 32-yard receptions for the Blackcats.

Prestonsburg is scheduled to host county rival Floyd Central for a home opener at 7:30 p.m. on Friday, Sept. 18.

SALYERSVILLE — Visiting Betsy Layne fell behind early and was limited offensively as Magoffin County pulled away to win 36-8 in a high school football season opener on Friday, Sept. 11.

Senior quarterback Lucas Litteral led Magoffin County to the victory, completing 8 of 15 passes for 199 yards and three touchdowns. Litteral, one of the most underrated high school quarterbacks in the state, showed poise throughout the season opener.

Austin Tackett rushed for Betsy Layne’s only touchdown in the setback.

Betsy Layne is scheduled to visit Knott Central on Friday, Sept. 18. Kickoff for the Betsy Layne-Knott County Central football game is set for 7:30 p.m. in Hindman.