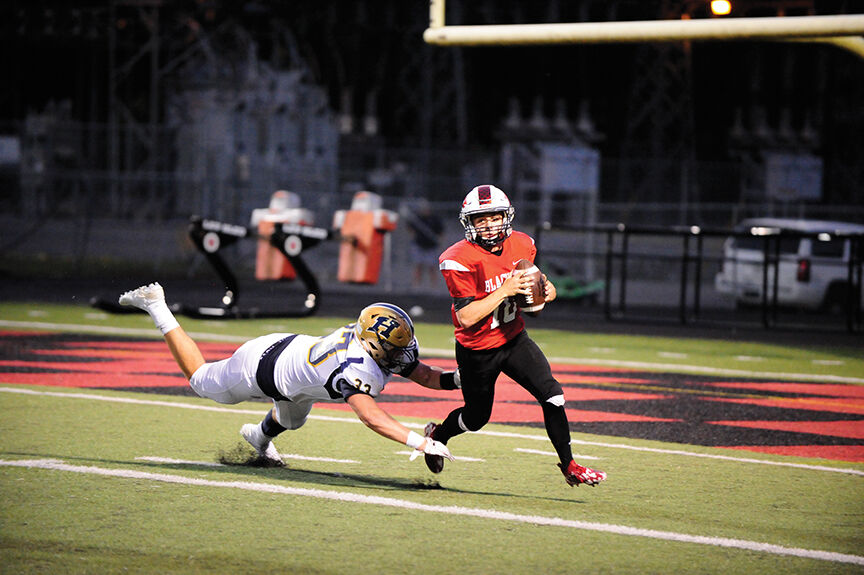 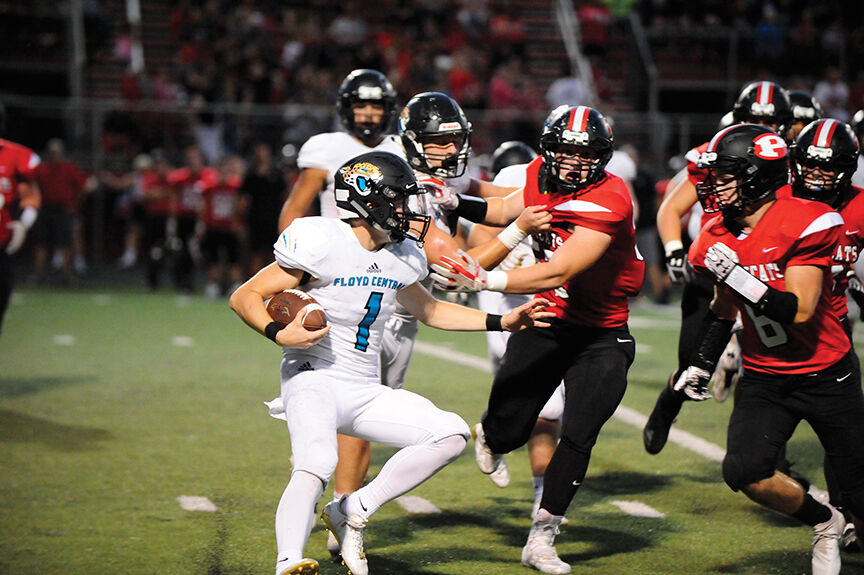 In this file photo, Floyd Central quarterback Caleb Hager scrambles with the ball. 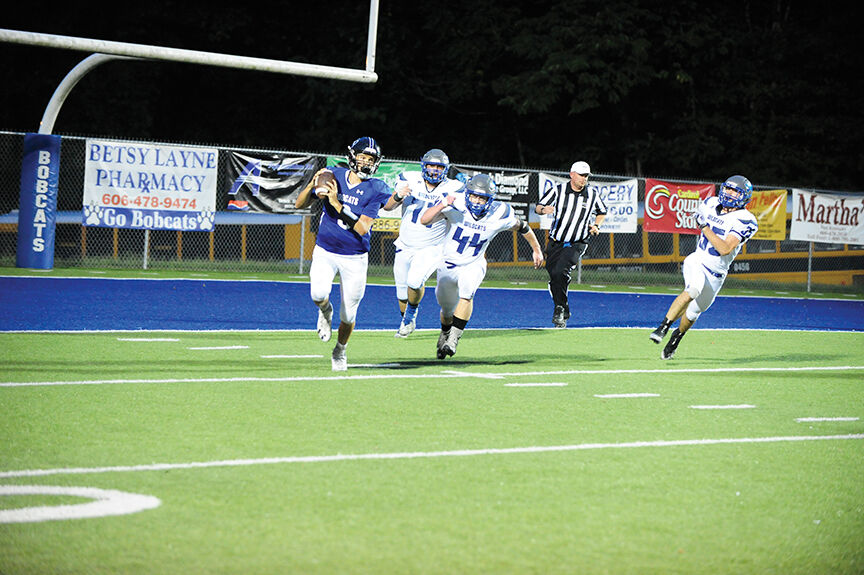 Notes: Betsy Layne will be looking to knock off host Magoffin County in a 2020 high school football season opener.

The Bobcats fell short of defeating the Hornets in 2019.

The Bobcats, under the direction of head coach Scotty McCoy, who made the move to Betsy Layne from Magoffin County, ended the 2019 high school football regular-season 4-6. Following a loss to Raceland in the opening round of the Class 1A Football Playoffs, Betsy Layne finished the 2019 season 4-7.

Betsy Layne junior quarterback Chase Mims is a proven leader. Heading into his third season as a starter, Mims completed 77 of 163 passes for 1,212 yards and 10 TDs in 2019. Mims threw 10 interceptions during his sophomore season.

Leading receiver Shawn Howell is back for his senior season with the Bobcats. Howell hauled in 14 receptions for 366 yards and five TDs as a junior.

On the ground, leading rusher Austin Tackett is back for the Bobcats. Another senior, Tackett rushed 116 times for 667 yards and seven TDs in 2019.

Defensively, leading tackler Marcus Hall is back for the Bobcats. Hall posted 69 tackles and five sacks in 2019.

Magoffin County ended the 2019 high school football season 3-7. The Hornets missed out on advancing to the 2019 Class 3A State Playoffs.

Kickoff for the Magoffin County-Betsy Layne football game is set for 7:30 p.m. in Salyersville.

Who 2 Watch: For Betsy Layne, junior quarterback Chase Mims. A longtime leader for the Bobcats, Mims could set the tone early in the upcoming season opener.

Notes: Prestonsburg head coach Brandon Brewer guided the Blackcats past his former team, Powell County, 27-20, during the 2019 season and will be looking to knock off the Pirates in an opener later in the week.

Senior quarterback Brayden Slone is among the players poised to lead Prestonsburg in the 2020 high school football season.

Through the air for Prestonsburg in 2019, Slone completed 37 of 97 passes for 467 yards and three TDs. The Prestonsburg quarterback threw eight interceptions.

Ranking second in rushing for the Blackcats, Slone took 70 carries for 351 yards and seven TDs.

Carter Akers led the Blackcats in rushing during the 2019 season. Set to take the field as a junior, Akers rushed 79 times for 356 yards and two TDs in 2019.

The Big Ten landscape: 'GameDay' signs and message board material for each league team

Owen Greene emerged as Prestonsburg’s leading receiver as a junior during the 2019 season. Greene reeled in 15 receptions for 200 yards in 2019.

Powell County compiled a 3-8 record in 2019. The Pirates suffered a shutout loss to Mason County in the opening round of the 2019 Class 3A State Playoffs.

Junior quarterback Holden Townsend is a proven leader for the Pirates. As a sophomore in 2019, Townsend completed 57 of 145 passes for 988 yards and nine TDs. Townsend threw eight interceptions in 2019.

Along with Townsend, third-leading rusher Josh Ledford (50 carries, 227 yards, 5 TDs) is back for the Pirates.

Kickoff for the Prestonsburg-Powell County football game is set for 7:30 p.m. in Stanton.

Who 2 Watch: For Prestonsburg, senior quarterback Brayden Slone. After a productive junior season, Slone is carrying momentum into his final prep campaign.

After being sidelined with an injury for nearly half of the 2019 high school football season, Floyd Central quarterback Caleb Hager will be looking to finish his career strong with a productive senior campaign.

Limited on the gridiron as a junior, Hager played in six of Floyd Central’s 11 games during the 2019 high school football season.

With Hager sidelined, classmate Brant Potter took over under center for the Jaguars. In 10 games, Potter completed 24 of 43 passes for 321 yards and one TD. Finishing second in rushing for the Jaguars, Potter rushed 66 times for 390 yards and three TDs. Potter is also a tight end/linebacker.

Floyd Central lost its leading rusher to graduation. But the Floyd Central backfield isn’t empty. Three of the top five rushers from 2019 are back for the Jaguars.

Doing most of his damage on the ground during the 2019 season, Hager rushed 23 times for 186 yards and three TDs to rank as the Jaguars’ fifth-leading rusher.

Defensively, junior Bryce Thacker is back for the Jaguars. Thacker ranked as the Jaguars’ fourth-leading tackler in 2019.

After falling to Belfry in the opening round of the 2019 Class 3A State Football Playoffs, Floyd Central concluded the 2019 season 3-8.

Third-leading rusher Elijah Gayheart (So.) is back for the Bulldogs after both Trajon Campbell and Reece Fletcher graduated. Gayheart rushed 22 times for 228 yards and four TDs as a freshman in 2019.

Leading receiver Andrew Ford is back for the Bulldogs as well. Ford hauled in 36 receptions for 496 yards and two TDs in 2019.

After falling to eventual state champion Pikeville in the second round of the Class 1A State Playoffs, Hazard ended the 2029 season 7-5.

Kickoff for the Floyd Central-Hazard football game is set for 8 p.m. on the Bulldogs’ home field.

Who 2 Watch: For Floyd Central, senior quarterback Caleb Hager. Healthy, Hager will be a leader for the Jaguars in his senior season.

For Hazard, senior quarterback Garrett Miller. One of the most under rated high school quarterbacks in the state, Miller thrives as a signal caller.